We've been overwhelmed by the immediate response to the launch of The ATFV Toy Story fundraising campaign - and so we are today launching a new scheme to play our part whilst also showing our support for Swans striker Jamal Lowe. 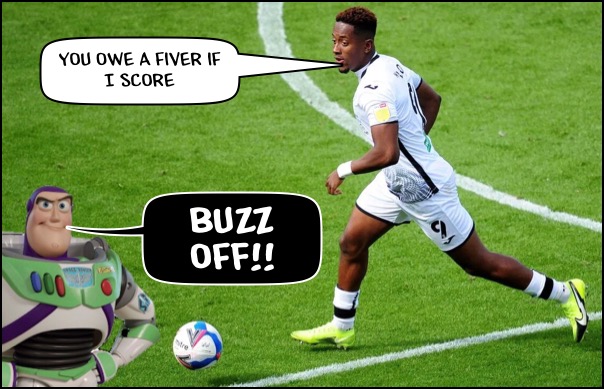 Just three days ago we launched The ATFV Toy Story, an ambitious fundraising campaign to raise money to refurbish the Children’s Wards Play Room within Morriston Hospital. The response has been unbelievable with donations hitting the £400 mark already! We are determined to build on this almost instant momentum and play our part in hitting the £1,000 target – and so today we launch a fun little scheme to keep the total ticking over as the Swans strive to succeed on the pitch.

The idea is a simple one: for every Championship goal scored and point secured by the Swans we’ll add a pound to The ATFV Toy Story Just Giving page.

However, for every goal scored by Jamal Lowe we’ll higher the ante and donate a fiver!!

I might come to regret this as Lowe looks full of goals at the moment, his recent devastating double in the South Wales Derby infusing him with confidence. But I’ve always put my money where my (considerable large and filthy) mouth is when it comes to our fundraising and I also wanted to take the opportunity to show some support for a player that hasn’t had the easiest time since becoming a Swan.

It’s taken Lowe a little while to adjust to playing as a striker rather than his preferred position out wide and he’s come in for a deal of criticism over his finishing. His work rate has never been in question but his impact has…but that all changed with his stunning performance against Cardiff City a few weeks ago.

His early opening goal was a little scrappy but he was in the right place at the right time and he deserved his smidgeon of luck as he put the Swans ahead. You could see the effect that scoring a derby day goal had on Lowe as seemed to visibly grow in stature throughout the game, culminating in his stunning second.

A rare Cardiff attack was broken up, presenting Andre Ayew with the ball deep within his own half. Striding forward, the Ghanaian sensed his strike partner racing alongside him from his initial defensive position and Ayew delivered a cute reverse pass into Lowe’s stride.

Despite picking the ball up just inside the Cardiff half Will Vaulks sensed the potential danger and threw himself into a challenge that Lowe simply evaded; a similar challenge came in from Harry Wilson near the edge of the box with the same result – search parties suggest that Wilson is STILL sliding helplessly – before a step over, a shift of the ball and an outrageous finish with the outside of his boot saw the ball nestle in the back of the net.

Securing his place in Swans folklore has been a defining moment for Lowe and a further two goals since his derby double (against Barnsley and last time out at QPR) has taken his total to six so far. And if his all round performance against Rangers is anything to go by, there’s plenty more to come!

If Lowe does go on a scoring spree then my brain and my heart will rejoice whilst my wallet screams out in pain and begs for mercy! My wallet can STFU though as every single penny that finds its way into The ATFV Toy Story coffers will make a huge difference to the young patients and incredible NHS staff within those Morriston Hospital Children’s Wards.

So here’s hoping for a 3 -0 win for the Swans against Reading this evening, with a Jamal Lowe hat trick securing the three points and an £18 donation from me!!

Don't Forget you Can make your own donation to the ATFV TOY Story by Clicking the button below!

The Ten Quid Question With Only One Answer